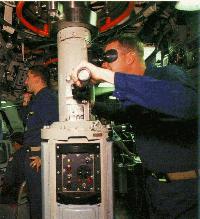 THE CREWS OF TRIDENT SUBMARINES

TRIDENT submarines, like all previous SSBN's, have two separate identical crews (called "blue" and "gold" for the Navy colors) who alternate manning the boat. This arrangement allows for maximum utilization of the ship at sea, while managing to maintain quality of life for the assigned crew members. While one crew takes the boat to sea on its regular cycle of refit and a two month patrol, the other is back at Kings Bay. There, the (off) crew members have a two-week "R and R" period following their two-month confinement in the submarine. They then undergo intensive refresher training in preparation for the next patrol.

The SSBN cycle repeats every 200 days. This means that each cycle will appear to move back by 35 days. This allows the crew to be home for holidays and the seasons they may have missed the previous year. Over a nominal three year tour, each crew member will have the opportunity to be home for two holiday seasons.

The two-crew system accomplishes several objectives. Most importantly, it enables the submarine to be at sea more than eight months during the year. This means the submarine can be kept at sea for over two thirds of its operational lifetime. An SSBN at sea and submerged is essentially invisible, and hence survivable from an enemy attack. This enables proper execution of the SSBN's strategic deterrence mission.

Second, it provides a regular program of refresher training for the "off" crew. Each crew must be ready at all times while on patrol. They must be experts on their equipment to keep it running during the long patrol. Refresher training on equipment exactly like that found on the sub keeps the "off" crew sharp. Intensive instruction serves to continually upgrade their knowledge.

Finally, there are refinements and improvements consistently being made to the weapons system's various equipment operating procedures. These changes, which must be well understood by submariners, are thoroughly studied during the "off" crew period.

The term "Ships Crew" is defined as all the officers (wardroom) and enlisted members assigned to a ship or shore command. On a fleet ballistic missile submarine the enlisted crew is made of technical experts from different occupational fields. These personnel ensure the ship is self sufficient while at sea. A submarine at sea is pretty much a small town with all the equivalent jobs being handled by the crew.

Personnel of the following technical ratings form the enlisted portion of the crew of a fleet ballistic missile submarine:

Electronics Technician (ET) - Responsible for all electronic equipment on board the ship. Some personnel are trained to operate and maintain the Nuclear Power Plant, while others specialize in Navigations/Electronic support equipment. The ET rating has recently absorbed the Interior Communications Electrician (IC), Quartermaster (QM) and Radioman (RM) ratings as well. The former IC personnel specialized in the maintenance and repair of all interior communications and sensors circuits onboard the submarine. Their area of expertise includes alarms and control circuits. The former QMs monitor the ships position while at sea, providing the navigational data to the Officer of the Deck to support the safe navigation of the submarine. The former RMs Operate, maintain and troubleshoot the complex communication system aboard the submarine. The capability of receiving continuous communications is a critical element of the nuclear deterrence force.

Hospital Corpsman (HM)- The onboard "doc". Responsible for the physical readiness of the crew. Constantly monitors atmosphere and water systems to ensure proper sanitary operation of these systems. Monitors the sanitation of food preparation, and is capable of handling most minor medical emergencies that might occur while a submarine is at sea.

Machinist Mates (MM) - Personnel in this field specialize in the operation, maintenance and repair of mechanical systems. Due to the complexity ofthe Nuclear Propulsion plant, and submarines in general, MMs assigned to submarines further specialize in Auxiliary, Propulsion and Engineering Laboratory Technician occupational fields.

Mess Management Specialist (MS) - Are responsible for providing properly prepared food for the subsistence of the crew. In addition, they ensure sufficient stock of rations are on board prior to deployment.

Missile Technicians (MT) - Perform preventive and corrective maintenance on the mechanical and electrical systems supporting the D-5 missile in its stowage tube. Specialize in the operation of the ships' strategic weapons control system

Seaman/Fireman (SN/FN) - These are non-rated personnel just reporting aboard for their first at-sea tour. They are exposed to the different occupational fields aboard a submarine to help them decide which career path to take. These personnel are responsible for the topside maintenance of the ship in port.

Sonar Technician (ST) - Are the underwater "eyes" of the submarine. Using the complex passive and active sonar systems, sonar technicians listen to the sounds from the ocean and provide information on the activity outside the ship.

Torpedoman's Mate (TM) - Operate and maintain torpedo tubes and associated tube-launched weapons. They ensure proper operation of the torpedo tube system during combat operations, and supervise the movement and reloading of weapons into torpedo tubes.

Yeoman (YN) - Are the administrative experts of the ship. They ensure all correspondence received by the command is properly replied to. Also ensure that all the personnel records are properly maintained and updated.

The above list identifies the specific enlisted ratings detailed to a submarine and a basic description of their primary job assignments. In reality, the multi-faceted environment onboard a submarine requires the performance of many other tasks, from the complex requirements of Maintenance Coordinator, to the simple ones of crew barber.

A crew is what makes any ship function. Without a crew, a submarine is nothing more than a very complex piece of cold, lifeless metal.